We pulled into Glen, NH about 8:30pm on Friday, January 16, 2015. Our first stop was to Grant’s Supermarket before it closed at 9pm. We picked up the necessary fixings for tomorrow mornings breakfast; bacon, eggs, toast and coffee, as well as PB&J and trail mix to have during the climb.

Our next stop was to the Red Parka Steakhouse & Pub for a hearty meal before bed. As we exited Justin’s Nissan Xterra I felt the temperature wasn’t too bad but we checked our phones for a weather update, -24o F with 85 mph winds. So much for moderate weather, the worst weather mountain in the world was living up to its name. The forecast did call for the fierce weather to pass through by noon the next day and calm down to 5o F with 40mph winds after noon.

With a full steak dinner and local brew in all of us, we headed North on St. Rte. 16 to our 2 bedroom cabin for the night. I gave one last check to the Mt. Washington Avalanche Center’s avalanche and weekend weather report. Here is the opening sentence, “There is no doubt about it, if you’re getting an early jump on the long weekend expect some of the worst weather Mount Washington can deliver. Tonight temperatures should drop to near -30F with winds gusting to 115mph.”  With that in mind, gear was briefly sorted as we settled off to bed by 11pm. 5:45am alarms would come all too soon and we had a big day ahead.

At 6am, my focus was all about the weather, currently at -17o F. The good news was that the winds had appeared to calm down in the valley and I had hopes that we’d have favorable summit conditions later on. Bacon, eggs and coffee was thoroughly consumed as we layered up and double checked our avy beacons. PB&J sandwiches were made and packed away. Topo map and compass stuffed in my jacket for easy access. By 7am we were on the road for the short drive to the Pinkham Notch trailhead. 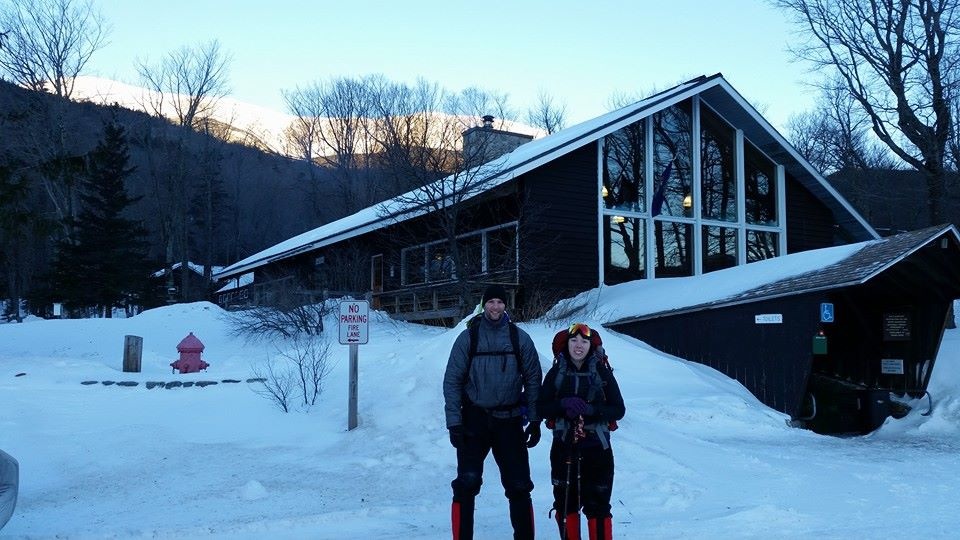 This was our first trip to the area and it took a minute to find the trailhead amongst the numerous buildings. Double-checking the signs and map we confirmed we were on the correct Tuckerman Ravine trail for the first half of our journey. 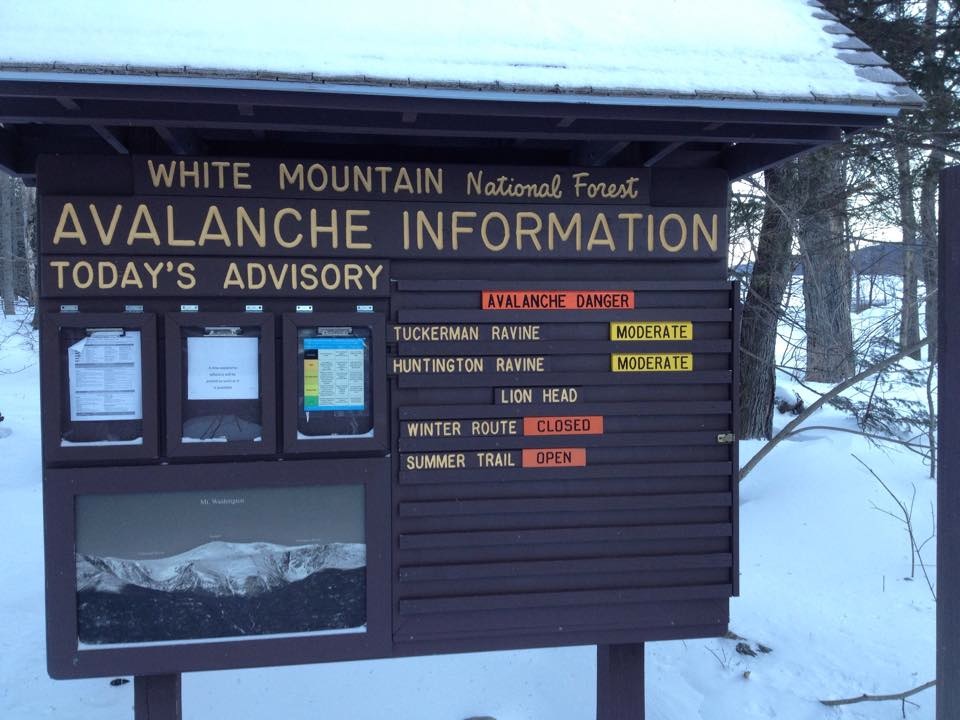 The trail at this time of year is very well packed and traveled and does not require crampons. It is a gradual but sustained uphill hike into the ravine. We stopped at points of interest to take photos and I double-checked my topo at each side trail junction. 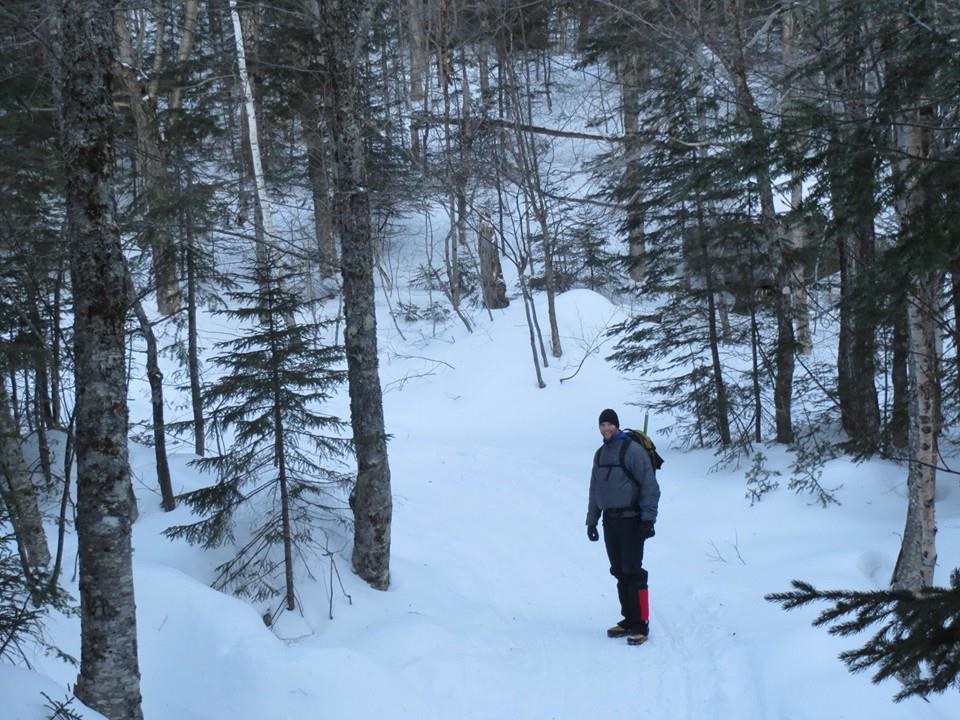 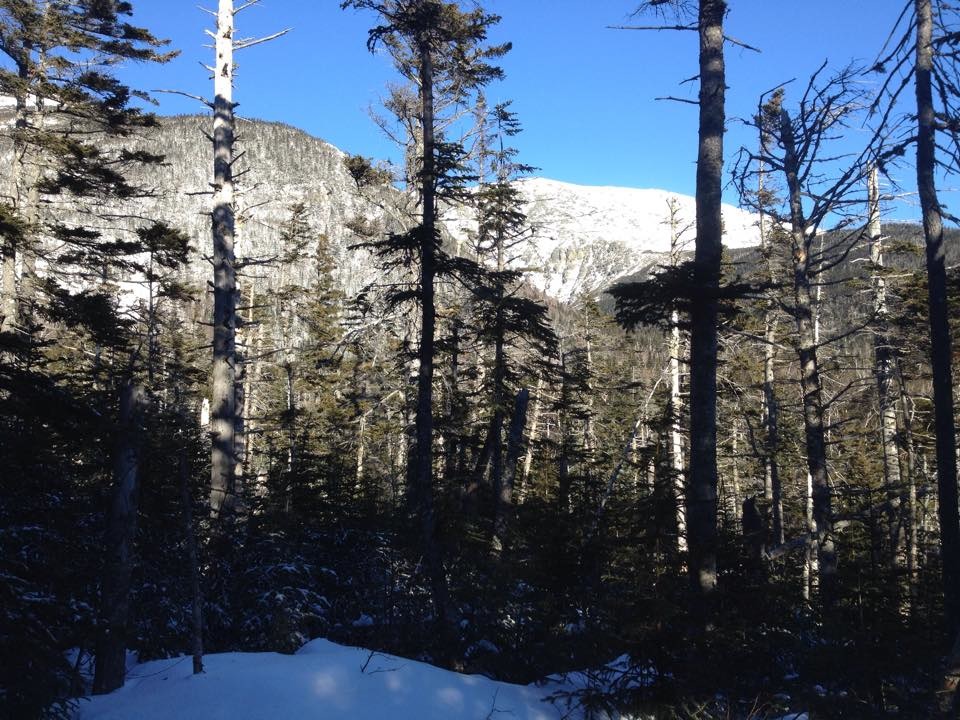 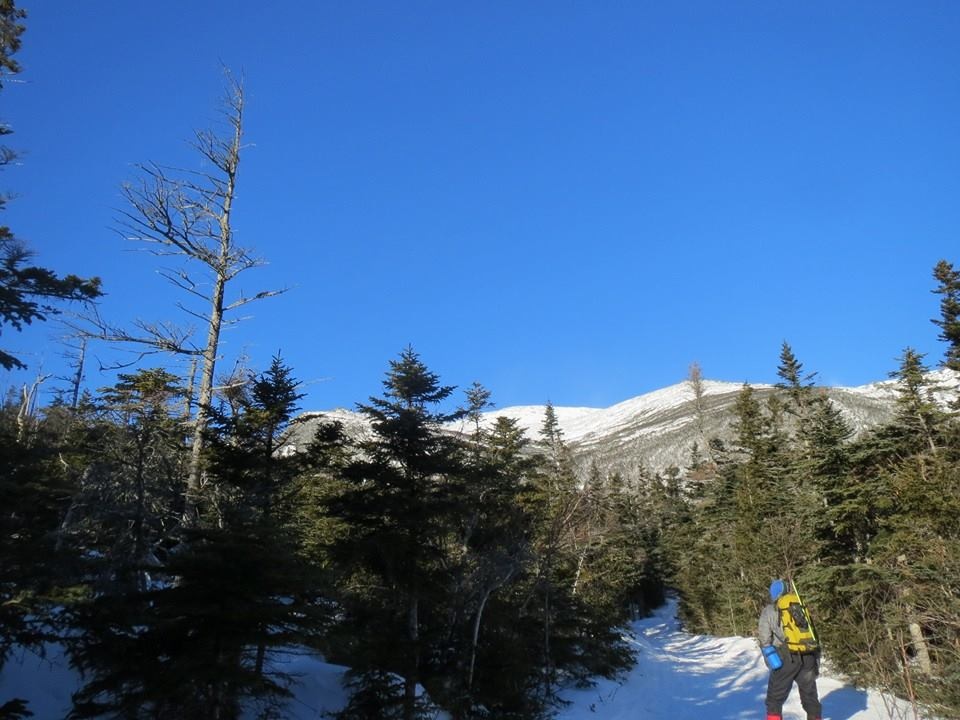 2.0 miles later, we reached the Lion’s Head summer trail junction. The summer trail was still in use, as the region had not yet received enough snow cover to warrant using the winter route. We paused for water and some gorp before heading off. I must have had my glove off my right hand a bit too long as it went numb by the time we started walking again. Thankfully it re-warmed fully without ill effect. 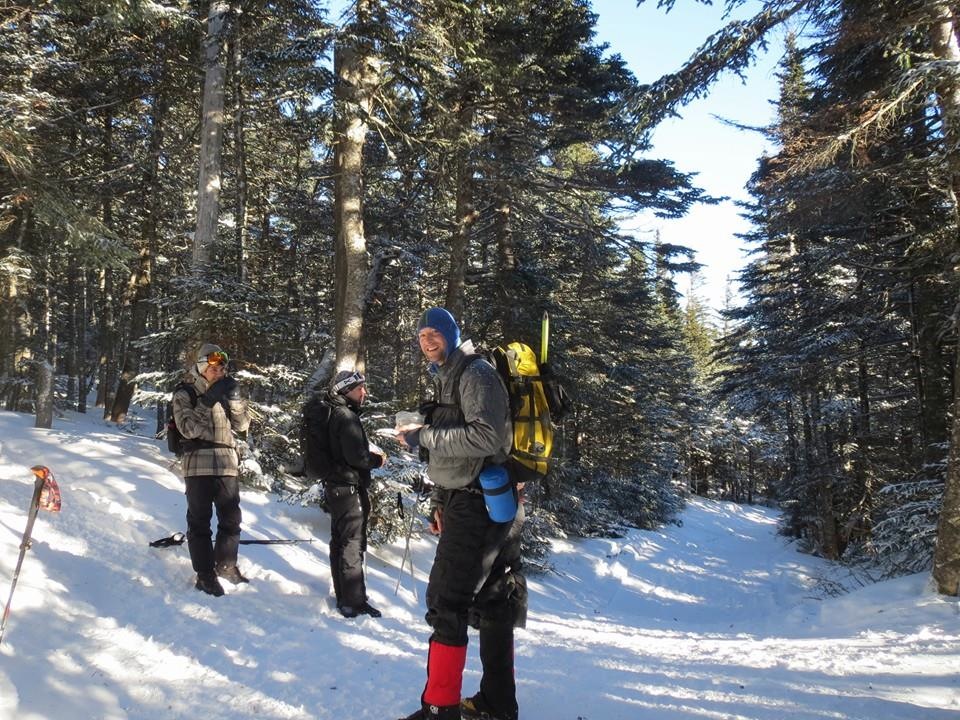 Within a couple hundred yards we quickly decided that crampons could be of benefit on this leg. A couple other groups also came to same conclusion as well. We soon stopped again to readjust one of Katie’s crampons as it had fallen off, but were soon again back on track headed for tree line. It was turning out to be a blue ski and low wind day, we were feeling very fortunate and stop at an overlook with some others to take in the view. 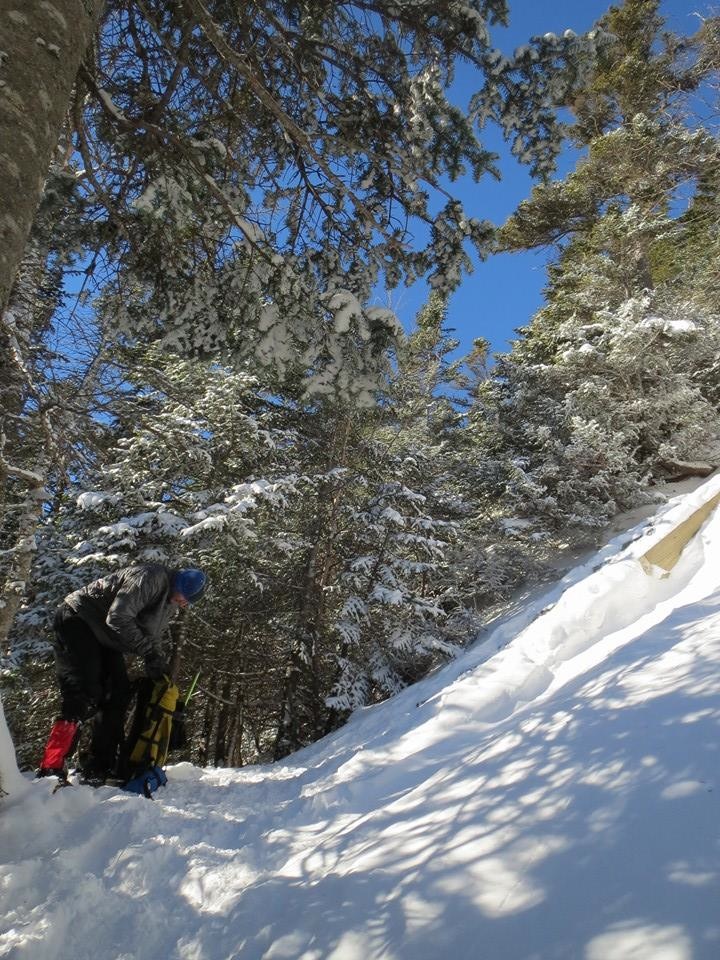 As we emerged from tree line, we noticed that the Lion’s Head trail was packed with numerous groups, some professional guided, others self-guided like us. Ice, instead of packed snow, was became the main bed surface as we neared the Lion’s Head rock outcrop. 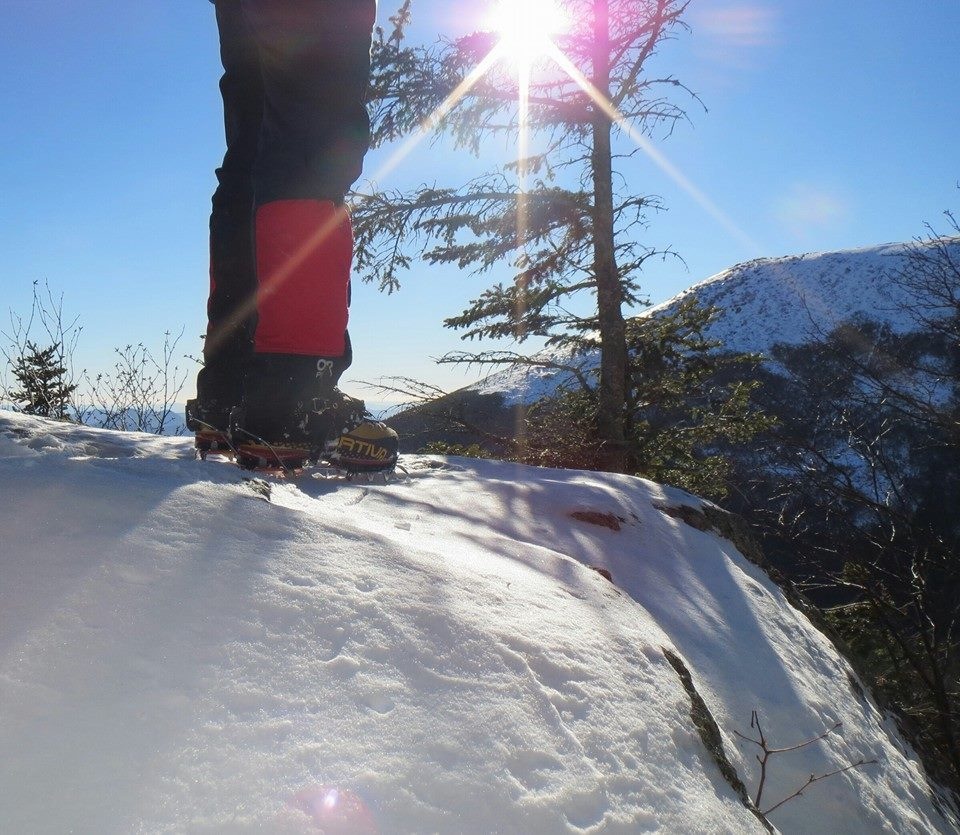 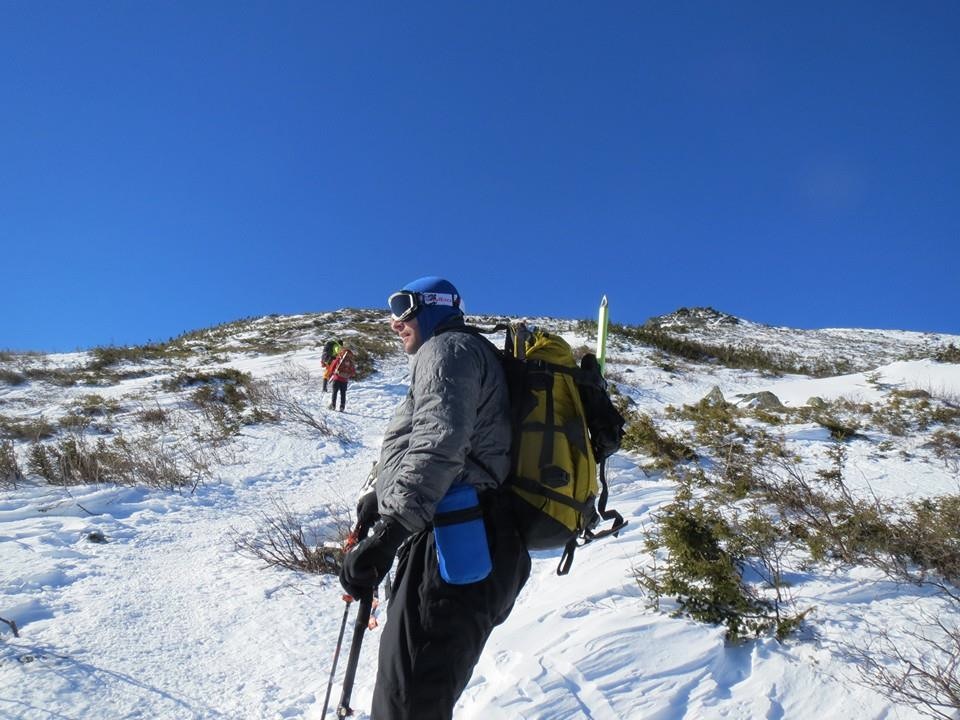 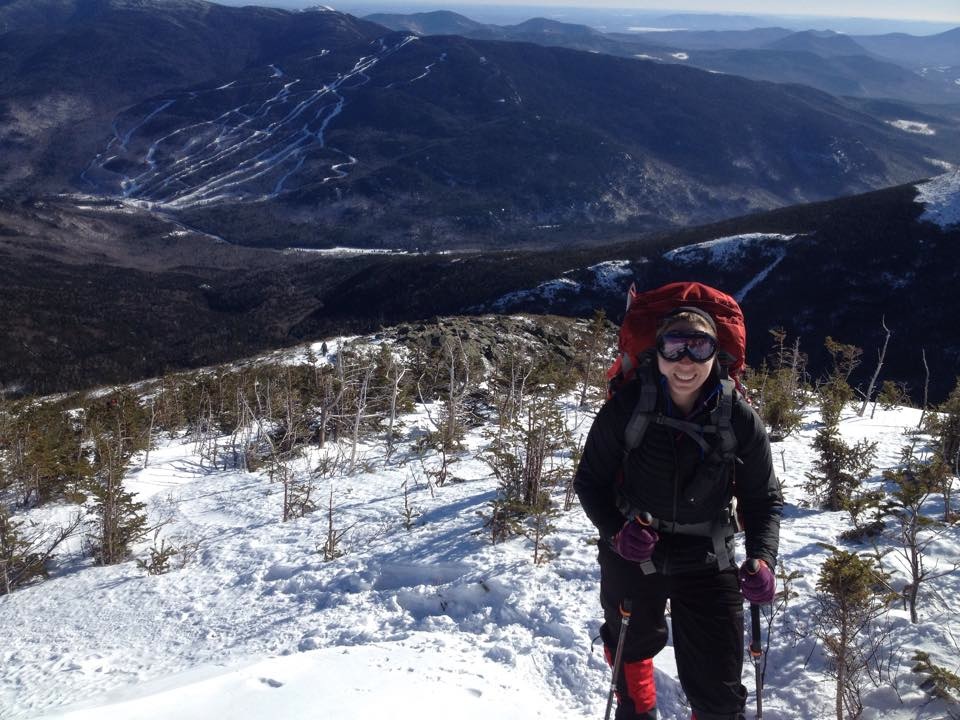 Winds continued to be minimal to non-existent at this point. Upon reach the Lion’s Head outcrop (~12:30pm), we stopped and enjoyed PB&J lunch sunning ourselves amongst the rocks with spectacular views of the valley below as well as Wild Cat Ski Resort on the opposing hillside. 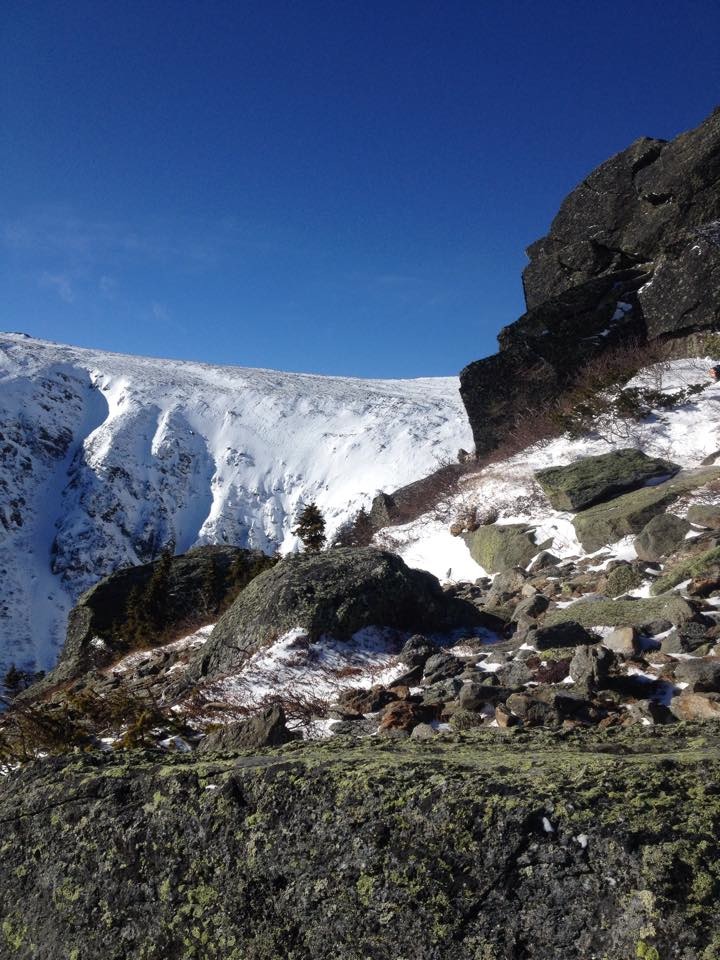 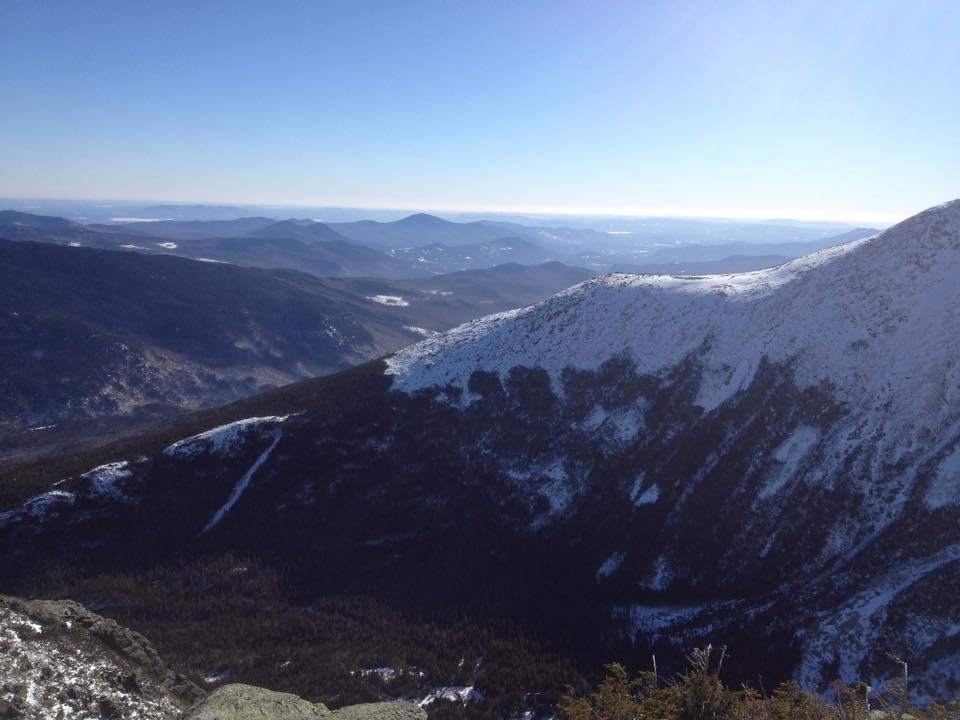 We also took this time to change our layering; up to this point I wore my Marmot Thermo hoody and Patagonia Nano puff on top with Black Diamond Windweight Gloves. I choose to remove the Nano puff and put on my Eddie Bauer Bombshelter insulated jacket and brought out my BD Guide Glove shells to be at the ready.   Katie chose to adjust some of her layering and we both put our goggles on at this time. Katie had her goggles on her forehead and learned that the perspiration from the initial climb had gone into her goggle lens’s and freezing. Thankfully, she brought a second pair after reading a prior trip report of someone losing their goggles and a guide came to the rescue with a spare. 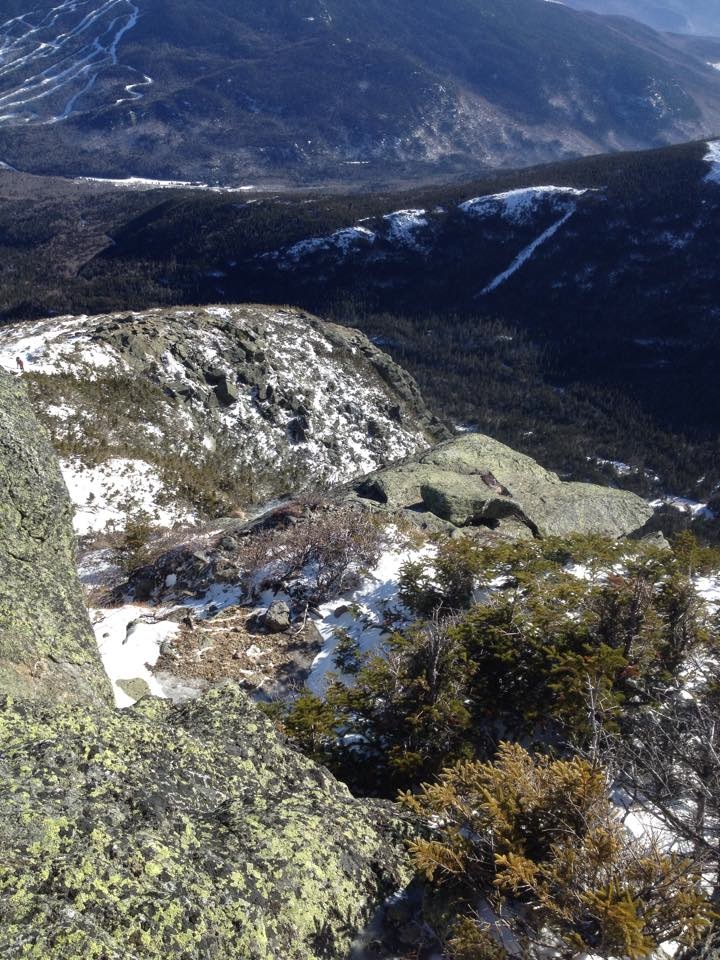 We scrambled over and around the remaining Lion’s Head rocks and into a slight wind, ~10-20 mph steady.   This was now flat terrain for a quarter mile before heading upwards again. As the flat ground increased in degrees, so did the snow pack and this was the first incline that I felt had slide potential, guessing 30-35o angle. We had our ice axes out for balance and to arrest any fall. Our speed was greatly reduced at this point and rest steps were taken frequently. 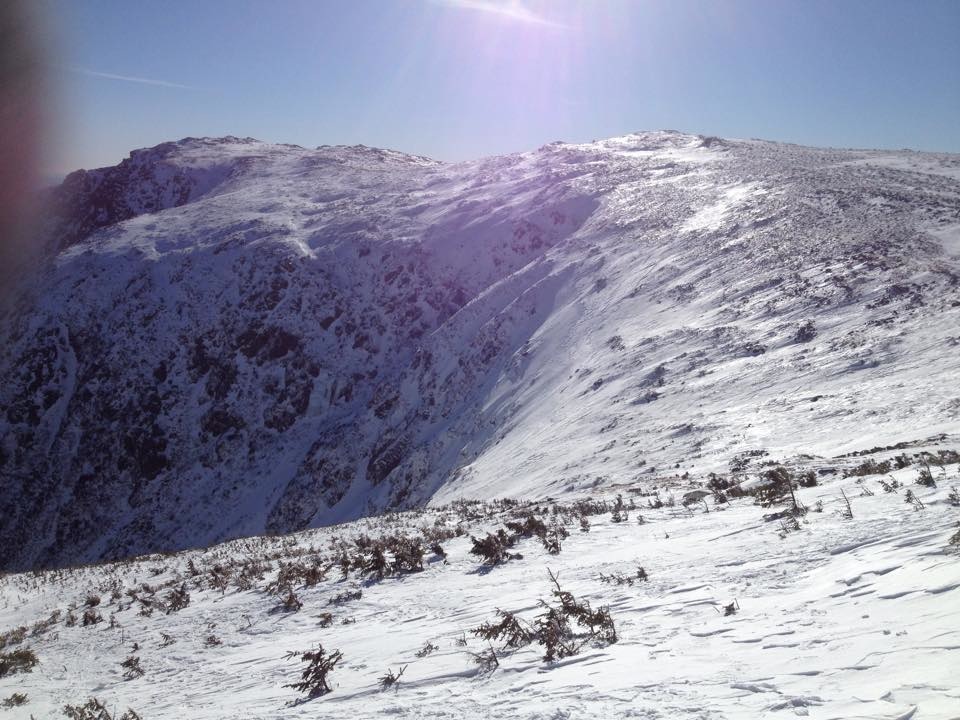 We reached another prominent rock outcrop and a sign indicated this is where the Lion’s Head trail joins back with the Tuckerman Ravine trail towards the summit. We could now see ‘the other side of the mountain’ and the wind increased upon us yet again (~20-30mph). This section of ‘trail’ was all ice and exposed rock. A fall or stumble here would definitely not feel good. This was the half-mile home stretch that was challenging and filled with fatigue. I probably remarked a thousand times about how remarkable crampons are, without them this ascent would be near impossible. 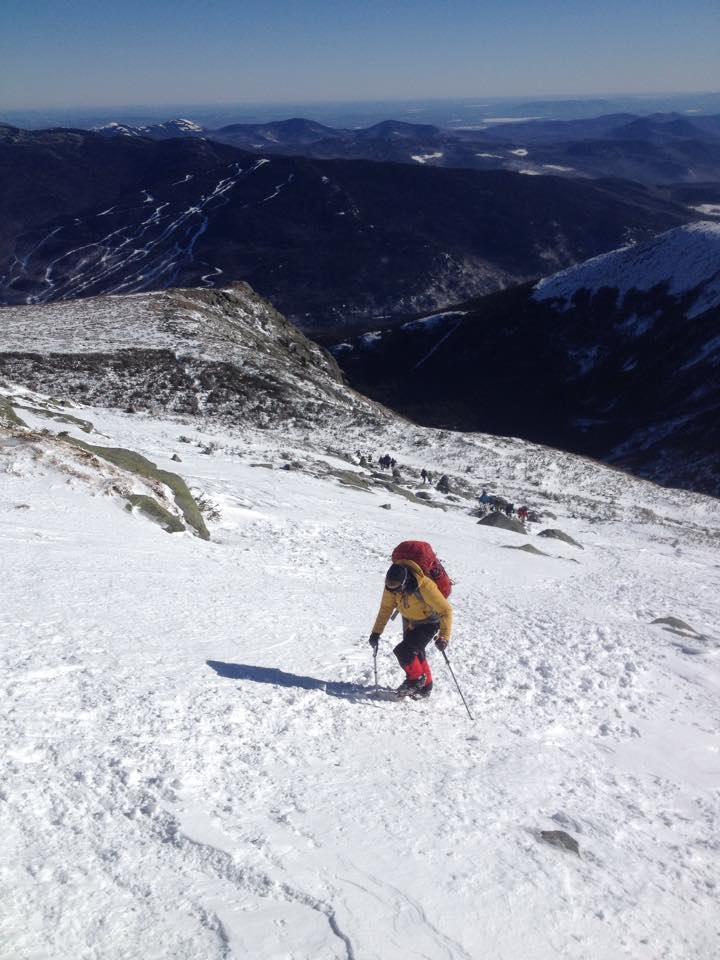 Getting towards the summit and seeing the paved road was a confusing sight. I knew it was there, but after a full day of being on a mountain, having a road up the other side felt weird. Regardless, it was still a hundred ice filled yards to the summit post, 6,288ft. The wind was now being felt (~45-50mph) and exposing my fingers for photos was short lived. 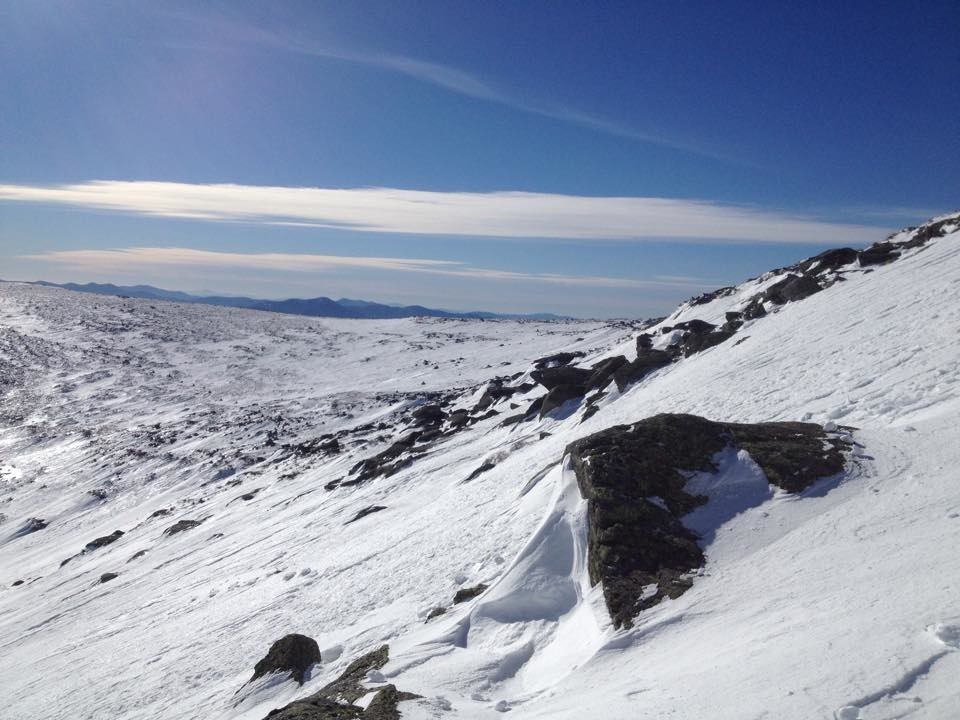 The summit is only half way; you must get back down to be successful. My legs were very happy to not be traveling uphill, but I was quickly reminded not to lose focus as I watch a woman trip and fall in front of me. She was okay and on a flat area so did not slide anywhere.

Descent was swift and we navigated the ice and rock field smoothly. I glissaded down the 30o-ish snow field for a bit of fun, using my ice axe for control and then to arrest my slide before walking again. We stashed our goggles at the Lion’s Head outcrop as the sun was now on the far side of Mt. Washington. Some people were still heading up at this time and we double-checked with them as they passed that they had headlamps, which they did, and exchanged bits of beta as warranted.

Soon we were back below tree line and then to the lower Lion’s Head/Tuckerman Ravine trail junction. We paused again and removed our crampons for the remaining 2 mile walk down the ravine trail. On the way down we passed a couple of people skinning their way up to ski down the Shelburne ski trail before dark. About half way down the trail we stop for a final water break. I had about half a Nalgene left of water and Katie’s had frozen so we shared. As I was about to finish it off I watched as the remaining water turned to slush and then froze solid. This all transpired within about 20 seconds of opening the Nalgene from my insulated sleeve. With all the hiking we had done I had forgotten we were in below zero temperatures.

Our legs and bodies were ready to be down this mountain but spirits were still high as we continued our trek. Justin was waiting for us at the Pinkham Notch Visitor Center. After a few finishing photos we were read for some serious feasting. 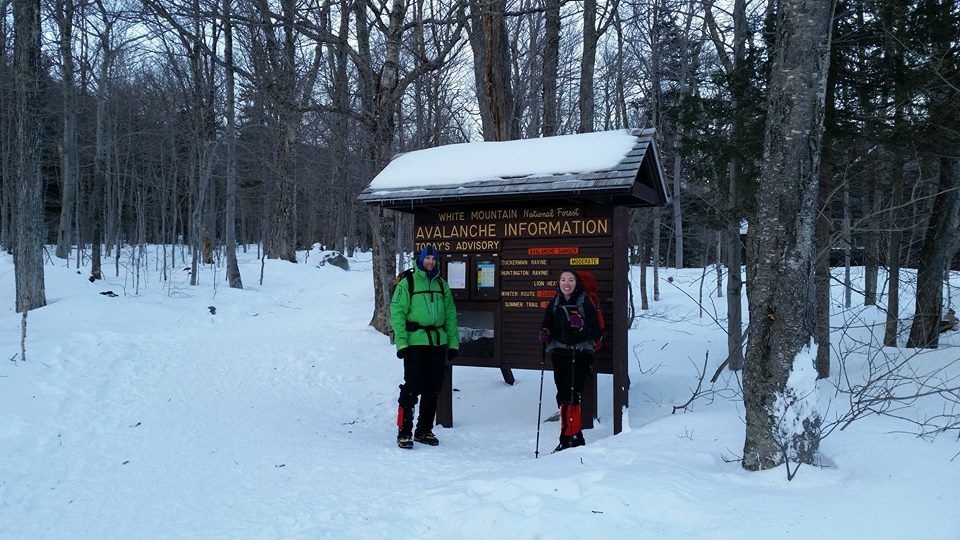 We went to the Red Fox Bar & Grille and had a beer in front of us by 5:30p. We ate and reminisced about the day’s activities. With full bellies we were back to the cabin and quickly to sleep.

Things I learned on this trip: