Our pre-race meeting was Friday at 5:30pm. We also had a mandatory equipment check of wetsuits, safety whistles, course map and compression bandage. We also learned the water temperature to be around 56-57 degrees, which matched the forecast highs for Saturday. After the meeting we went back to our AirBnB to make a nice spaghetti dinner and relax.

At 8am, Saturday we were off. The race started with a 1.95-mile road run from the Paddy’s Creek beach parking lot to a bridge that we crossed upon entering the park. As is typical in a race, the leaders and a few others took off fast. We were faster than expected at 9:15 pace but kept composure as many went past, we planned on a 6 hour race. At this point Josie felt like it was going to be a long day as too many teams seemed to be super fast. 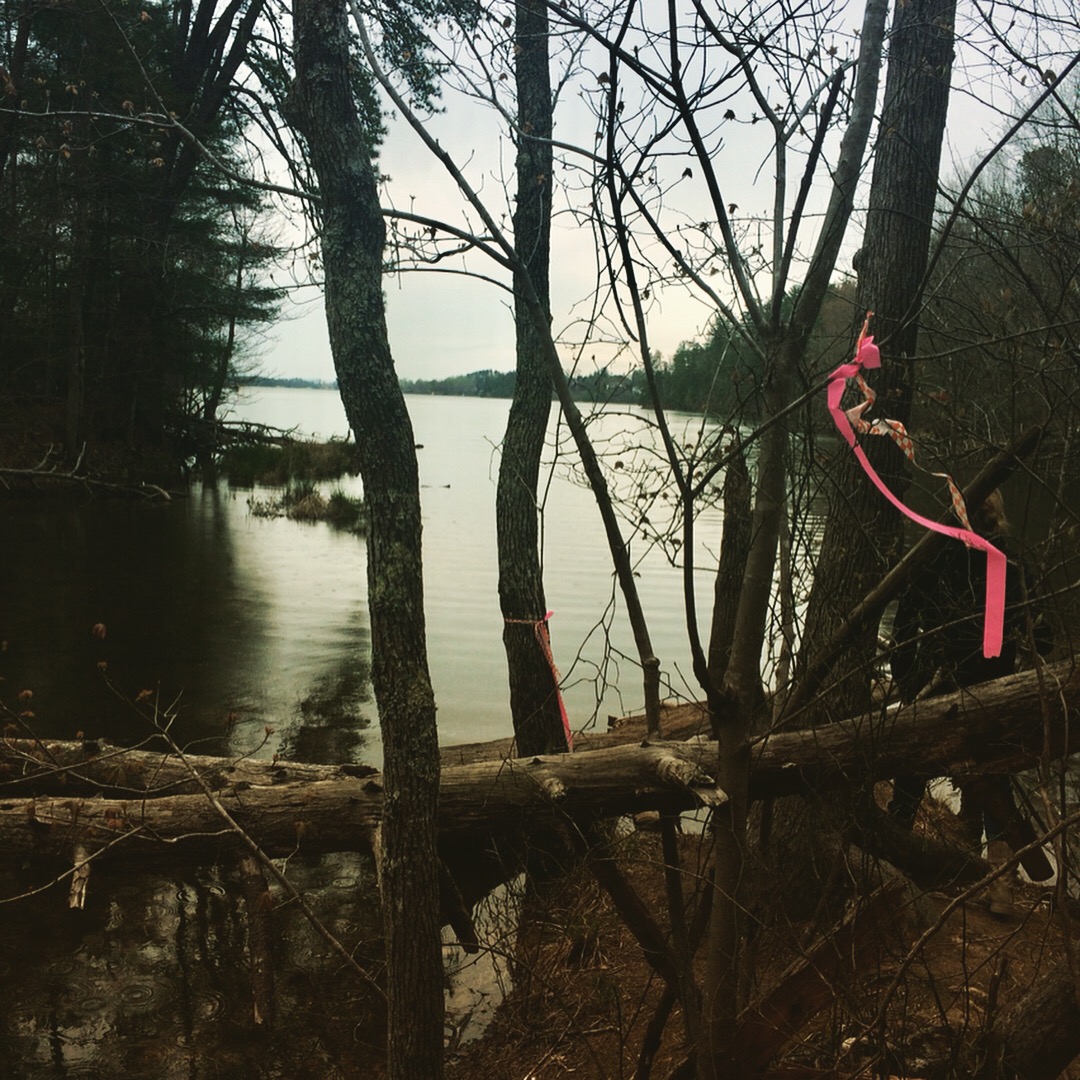 At the bridge we scrambled out a short peninsula to start our first swim. We connected ourselves with the bungee tether and waded into the water. Once past a few underwater trees, we began our 800 yds. swim. This was a learning experience; we’d only had one opportunity prior to this to experiment with the tether in open water. Josie being the stronger swim was in the lead, but was new to open water and was very disoriented. I struggle with getting tangled in the tether and keeping my pull buoy between my legs. We tried swimming next to each other, but with the tether still attached is was creating a lot of drag as it looped between us. Needless to say, it was a long 800yds to the exit point. Here we both decided the tether was causing more harm than good so I just wrapped it around my waist a bunch of times before tying it secure.

We were back on land for a short 0.3-mile scramble before dropping back in the water for a 50yd. crossing. Here we were back to the beach area where Andrew decided to run ahead to relieve himself in the water leaving me for our one photo opportunity by the professionals by myself. Now, ready for another longish swim of 700yds, this time without the tether connecting us. This was much more enjoyable for each of us but Josie being a better swimmer out paced me and forgot to stay close. I had to send a kayak after her to have her wait a bit for me to catch up, she forgot I was slower. At the swim exit, they had tied a rope to a tree to assist in scrambling up the wet red clay embankment, which was nice. 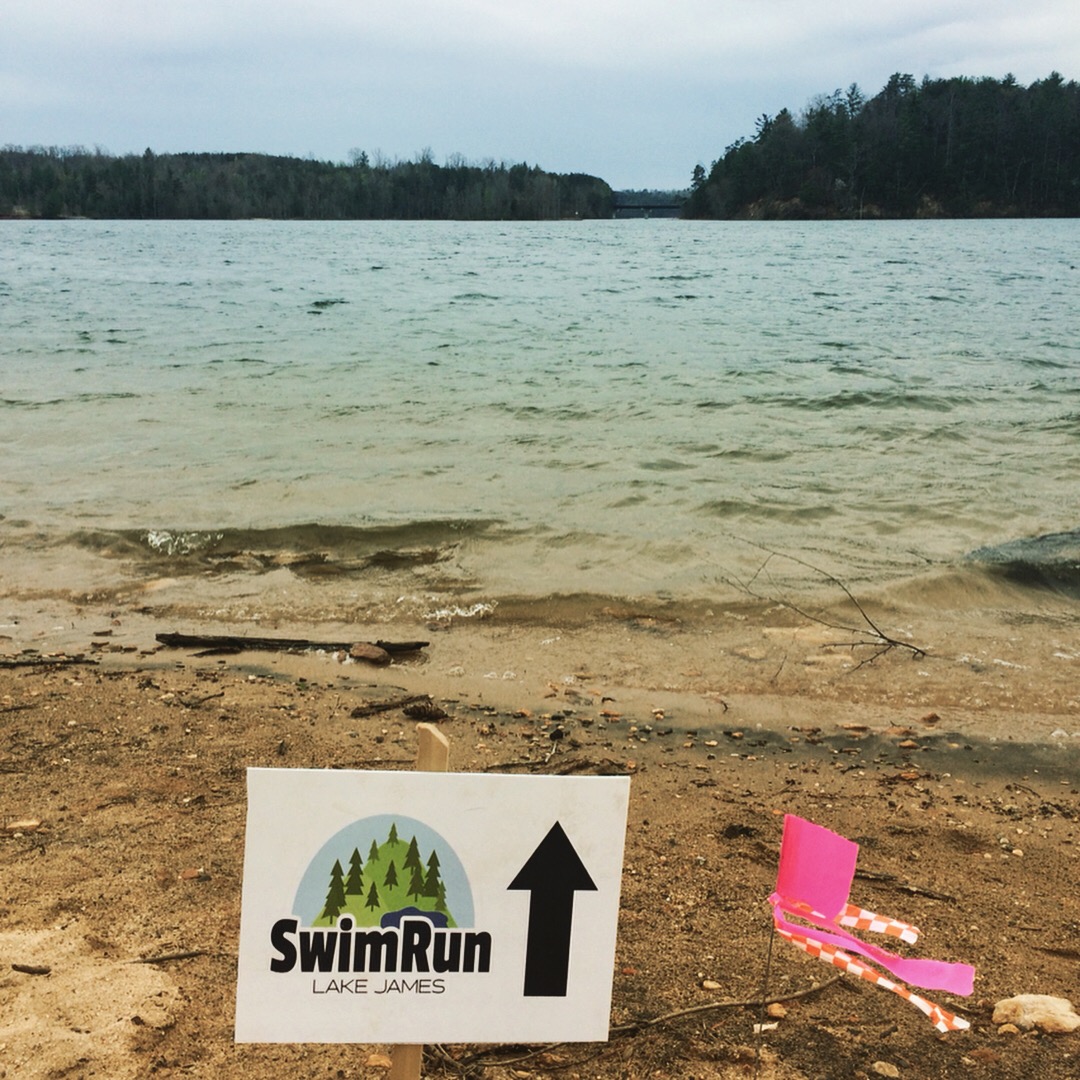 Back on land but with cold wet feet, running the next 0.55-miles was nice to generate warmth but the feet were numb and clumsy. We passed a team on the run and then another two teams as we entered the water for the next 300yds. swim back to where we exited the first swim. Here was also positioned an aid station and we stopped for a couple of gels and Tailwind electrolyte drink, and Josie was even eating and drinking at aid stations so that was a plus!

This then began the long run of the day, 7.70-miles. With cold feet, we were happy to be running for a bit, and on trails, our happy place. Josie was so warm she even took off the top half of her wet suit to help with heat and shoulder movement on the run. The trail started as a single-track mountain bike trail and then turned off onto fire-roads for much of the remainder. Andrew decided to start running up some hills, so Josie followed and we were cheered on by a trail runner that startled us as he was coming up quick (we thought, no way did a team get a big energy surge). He said, “Way to work those hills!” Furthermore, our trail running again turned into an asset for us as we passed 5 teams on the this run leading to another aid station for fuel more fuel. We both felt strong on the run and truly enjoyed just chatting and hanging out in the woods, that’s what we love.

Next up was the longest swim of the day, 1600yds. out to an island. Again un-tethered we began and stayed together nicely the entire time. Even though the water temp was 56 degrees, we never felt cold in the water swimming. But when we exited after this swim, we started to shiver a good bit. Unfortunately it was only 0.08-miles to the other side of the island were we had to slide back down the embankment for another 450yds. swim. Just before entering the water we passed four guys standing off to the side, one in a teeth-shattering shiver. The race director was there instructing them to do squats and jumping jacks, but the coldest of them wasn’t having it and he was done, he felt too cold to continue.

So back in the water we went cold but knowing we needed to keep moving. And move we did, this was likely my strongest swim ever as even Josie said she was working to keep up with me, which never happens. Onto another small island for 0.05-miles and back into the cold water for another 350yds. to another island of 0.05-miles and finally across a short 50yds water gap to mainland. This gave us a short 0.42-mile break in swimming to rewarm a little before swimming and inlet of 125yds. traversing the peninsula 0.05-miles before re-entering for a 175yds. swim. Not gonna lie, adrenaline was getting us through these repeated dunking’s and short runs as my mental state was getting rather annoyed with it. Regardless, I knew it was the only way to the finish, but don’t let me sound like its all sunshine and roses, no problems, I’m superman. Josie of course likes the water, yet still was ready to be warm!

Yay, for a 1.3-mile run and some aid station fuel. This excitement was tampered by knowing we had the last long swim of the day ahead, 1300yds. and then a few more puddle jumps to the finish. Energy levels were remaining good, but I knew this swim more than others was just going to be slow and steady. Right before entering we met another co-ed team who had stopped for 15-minutes because the male was feeling hypothermic and apparently started to mildly panic on the last swim. We told them we were there to help if needed, which gave them comfort, and we all waded in. Slow and steady and we were there without incident from anyone. At this point our competitive side was kicking in and we wanted to finish strong and not get passed!

0.45-miles on land to re-pass another team whom passed us in the water and we were sprinting for the finish with a 200yds. swim, 0.05 on land, a 100yds. swim and a strong run up the boat loading ramp to the finish line. Total time: 5 hours, 7 minutes, 41 seconds for 8th place out of 15 co-ed teams that finished.